This story was taken from the Today Show website.

By Kenzi Abou-Sabe and Cynthia McFadden

A few months into the pandemic, 11-year-old Jaidyn Oloo was struggling. Attending school online and feeling isolated from his friends, he became increasingly sad and angry. His parents started to worry at the change in their normally gregarious child, especially when he got in a physical fight for the first time.

“That was a big signal to me that there was something else going on,” his mother Jen Oloo said.  In a video shot in October, around what the family considers the height of his struggles, Jaidyn described what he was going through. “The feeling that I have the most is sadness. Behind that sadness, then there’s more sadness,” he said. 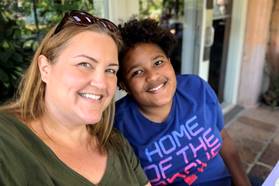 But in the months since, Jaidyn, who lives in Los Angeles, said he’s come “a long way.” He started seeing a psychiatrist and was diagnosed with ADHD, then began taking medication. Now, he said, he feels calmer, more focused and “chillaxed.”

Looking back, those early months of the pandemic were “a very, very stressful, dark time,” Jaidyn told NBC News in January. “I was dug so deep into that dark place that I couldn’t think straight…I got so pissed at myself once that I thought [to] stop living entirely.”

The video of Jaidyn from that “dark time” is part of a collection of interviews with 64 children and adolescents from across California talking candidly about their emotions as part of “The California Healthy Minds, Thriving Kids Project,” being released this week.

Developed through a $25 million grant from the state of California, the project aims to give teachers and parents foundational tools to help children manage their emotions, normalize conversations about emotional wellbeing and teach essential coping skills. The videos — in both English and Spanish — feature kids of all ages in their own words. It’s one piece of an unprecedented $4.4 billion investment California is making in youth mental health over five years.

“Now more than ever, it’s critical that we provide our children with equitable opportunities to develop mental health and wellness skills to support their long-term health, as well as their success later in life,” said Jennifer Siebel Newsom, who as first partner of Gov. Gavin Newsom is helping promote the initiative. “I’m hopeful these resources will provide children and the adults in their lives with the tools kids need to thrive.”

Even before the pandemic, the rates of children reporting emotional distress were rising, with more than 1 in 3 U.S. high school students in 2019 reporting they had experienced persistent feelings of sadness or hopelessness in the past year, a 40 percent increase from a decade earlier, according to the Centers for Disease Control and Prevention. Yet resources for mental health were largely inadequate, with roughly half of the nearly 8 million U.S. children with treatable mental health conditions not receiving treatment in 2016. California, the nation’s most populous state, ranked 48th nationally for providing mental health services to children in 2018.

The pandemic only exacerbated things. Studies found symptoms of depression and anxiety among youth globally doubled during the pandemic, with 25 percent experiencing symptoms of depression and 20 percent experiencing those of anxiety. The increase led to the surgeon general issuing a rare advisory on the youth mental health crisis last month. One of its recommendations for improving youth mental health was to “empower youth and their families to recognize, manage, and learn from difficult emotions.”

That’s the goal of the new program, said Dr. Harold Koplewicz, a child psychiatrist and president of the Child Mind Institute, the nonprofit that designed the resources platform. “Since Covid has hit, we know that every child’s mental health has been affected. That doesn’t mean they have a mental health disorder, but they are more anxious, they are more depressed,” he said.

The videos are “a way to scale a set of tools and skills that every child needs, whether they have a mental health disorder or they’re mentally healthy,” Koplewicz said. “We want them to understand their emotions and know how to deal with that.”

The central piece of the Healthy Minds, Thriving Kids project is a 30-video series for students that covers fundamental mental health and wellness skill sets. The lessons are based on evidence-based research and techniques, like deep breathing and mindfulness, with the goal of making skills that Child Mind Institute therapists have taught to over 60,000 children in person available virtually. “Our hope would be that not only does the average child get new skills, but if there is a child suffering and he or she watches these videos, that they feel more courageous to raise their hand and ask for help,” Koplewicz said.

There are separate video modules — roughly five minutes each — tailored for elementary, middle, and high school age groups, with introductions for caregivers and educators highlighting the importance of self-care and signs that kids may need extra help. The project also includes written resources for educators and parents summarizing key points, along with exercises to reinforce the recommendations at home or in school.

The videos also feature six teachers, including Jaclyn Barulich, a high school English teacher in Los Angeles’ Watts neighborhood. “There’re a lot of issues that maybe I haven’t seen in the past, or weren’t vocalized in the past that I’m seeing now,” she said. “It’s important to recognize the issues we’re seeing now.”

Part of that, she said, is getting the students comfortable talking about what they’re feeling. Barulich believes the video project, which shows kids who look like her own students opening up, can give the ones who watch them the confidence to do just that. “I can’t wait to share it,” she said. “It’ll be great to show it off to my colleagues, my staff, and my kids most of all and use some of the videos in my class too.”

In an effort to share the videos as widely as possible, the program will offer a paid incentive for California teachers who spend 30 minutes watching a selection of the videos and answer a few questions on the online platform. 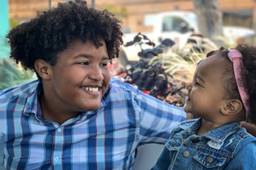 For the Oloo family, Jaidyn’s participation in the videos is about making sure other kids know they’re not alone and that they can seek help when they need it.

He believes it would have helped him find that courage sooner if he had seen other kids speaking honestly about their emotions, like he did in the video.  “I’m super proud of him,” his mother Jen said. “He really wants to be able to use his experience to help other kids.”

The videos and other free resources can be accessed on the California Healthy Minds, Thrivings Kids Project website.